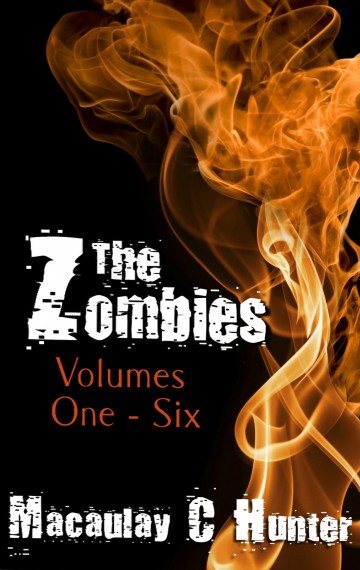 Get all six volumes of the popular and controversial The Zombies series for one low price!

A mutation of a common cold virus is spreading through the world like wildfire. Highly contagious, Sombra C transforms its victims in the weeks before death into violent, zombie-like creatures. Vigilante soldiers have taken to the streets, denying the infected a medication that can freeze the virus in its tracks and killing them instead.

After a zombie attack on their high school holiday party, Zaley Mattazollo and her newly infected friends are run out of town. But as the United States falls further into chaos, there are perilously few safe places to go. The nearest harbor for Sombra Cs is fifty miles away through enemy territory . . . and there is very little chance that all of them will make it.

What Amazon and Goodreads reviewers are saying:

★★★★★ “This is a totally different slant in the zombie genre.”

★★★★★ “I would confidently set Macaulay C. Hunter at the magnificence table, shoulder to shoulder with Stephen King.”

★★★★★ “This book was very different from what I expected from a book about zombies, and far more horrifying in its everyday ‘this could really happen’ realism.”

★★★★★ “I loved this series. I’ve read many zombie genre anthologies and this really is the best out there. The characters are well developed, the story is intriguing, and the author doesn’t rely on stereotypes like many others in the genre. If you’re looking for an engrossing new read, this is it!”

Buy the box set that you won’t be able to put down and see what everyone’s talking about! Or read for free with KU!