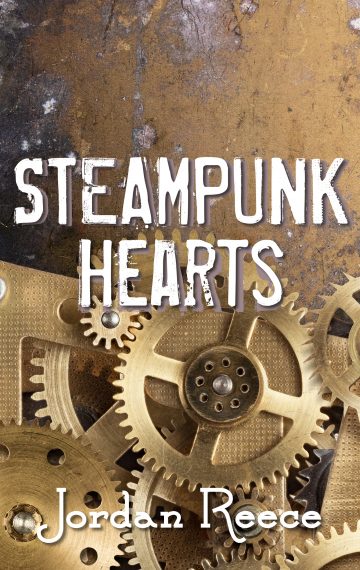 Step into four steampunk worlds in this box set of psychic powers and mechanical men, dragons and demons, mysteries and adventure, and M/M romance. Includes The Hunter, The Seer, The Tracker, and Hexed.

The Hunter
It begins with a mysterious package in the mail . . .

There isn’t much excitement to be found in the small farm town that Elario Repse calls home. But when a letter arrives from his deceased uncle, begging him to deliver a dangerous dragon’s eye to a man named Westen at’Inamon, Elario has no choice. With the military in pursuit, he flees across the country of Phaleros.

By the time he reaches his destination, he has a new problem. The dragon’s eye has attached itself to Elario, allowing him to see through time and even read minds. Westen has no idea how to separate them, but he does know the Crown will stop at nothing to kill Elario for bearing it. A dragon’s eye is the key to bringing down the greedy, corrupt upper class of Phaleros, if only Westen can keep Elario alive long enough to use it.

The attraction between them is undeniable. Westen is the most handsome man that Elario has ever seen, yet his quirky, secretive personality runs hot and cold. Still, he will do anything to protect Elario. They are falling in love at the very worst time . . . and with peril around every corner, there is no guarantee of a happy ending.